As promised earlier this year, Facebook is launching its Portal line of video-calling smart displays in more countries and adding support for WhatsApp video calls as well as Facebook Messenger.

But the company is also launching three new Portal devices, all of which are cheaper than the original models Facebook launched last year. 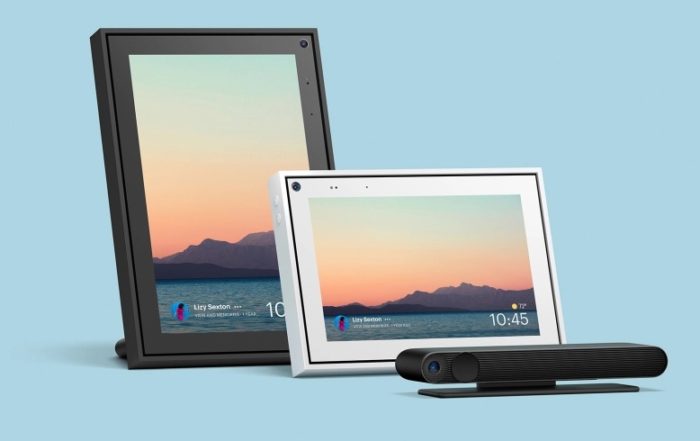 The new Portal Mini sports an 8 inch HD display, and 10W stereo speakers plus a woofer, and a $129 price tag.

Facebook’s new Portal is a 10 inch model with the same speaker system. It will sell for $179

And the new Portal TV is a small gadget that you can place above or below your TV to add video calling support to the big screen. It’s priced at $149 and features an 8-mic array (twice as many as the other models), and a 12.5MP camera with a 120-degree field of view (compared with the 13MP/114 degree cameras in the other new devices).

Facebook says you can also save $50 off those prices by bundling any two Portal devices.

While Portal is nominally a smart speaker/display with support for “Hey Portal” voice detection and support for Amazon Alexa and music and video streaming services including Amazon Prime Video, the platform is clearly an extension of Facebook’s messaging services.

A Smart Camera feature can follow you as you move with automatic panning and zooming, letting you make hands-free video calls without worrying about keeping yourself in the shot. And there’s support for AR effects if you want to give yourself a silly hat, glasses, or what have you while you video chat.

There’s a physical switch that lets you shut off the camera and mic when you’re not using them though, and if you don’t want Facebook to listen in on your voice recordings, you can “turn off voice storage in Settings at any time.”

Whether that’s enough reassurance to convince users to put Facebook cameras and mics throughout their home remains to be seen… but the launch of second-gen hardware suggests that Facebook is still committed to the idea.

Meanwhile, Facebook is keeping one first-gen model in its new lineup. The 15.6 inch Portal+ with a full HD display is still available for $279. In addition to a larger, higher-resolution screen, this model has a 12.5MP camera with a 140-degree field of view and 15 watt stereo speakers plus a 4 inch woofer.

The new models are up for pre-order in the US, Canada, and Europe starting today, and the new Portal and Portal Mini should begin shipping October 15th, with the Portal TV coming November 5th.