Facebook’s smart display is here… but the Facebook Portal isn’t really the Amazon Echo competitor many folks had been expecting. In fact, Facebook is using Amazon’s Alexa digital assistant to power voice controls — so this is more of a collaboration with Amazon than a competition.

You can talk to the device by saying “Hey Portal,” and then use it to stream music, watch videos, get answers to questions, or set reminders. But really the whole point of Portal is to give you a new way to use Facebook Messenger to make video calls.

Facebook says Portal offers a more immersive experience thanks to its large screens, and uses AI to keep you in the shot and in focus as you move around.

Really, Portal seems as much like a household version of a video conferencing system as it does a smart speaker or smart display. 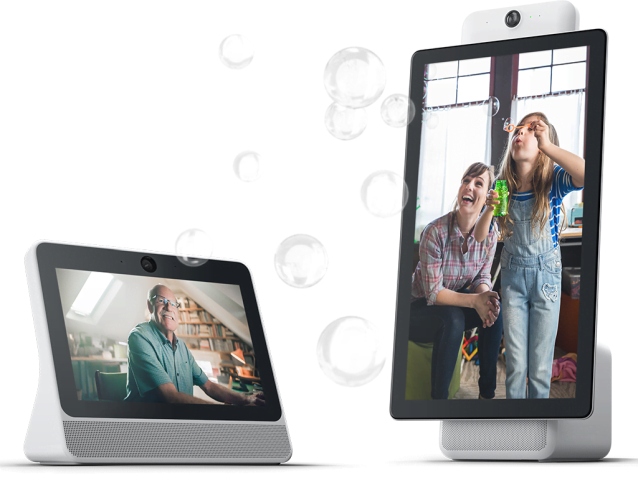 Facebook is also offering a $100 discount when you buy any two Portal devices at once. The video chat machines are up for pre-order at portal.facebook.com, and they should hit Amazon and Best Buy soon as well.

So why use Portal instead of just firing up Facebook Messenger on your phone? You get a bigger display and hands-free controls. But I think the key selling point is probably the “smart camera” and “smart sound” technology.

Facebook says the camera “automatically pans and zooms to keep everyone in view” even if you’re moving around a room. It can detect multiple people and use a wide shot. If only a single person is speaking, it can zoom in to make sure you take up most of the frame.

The smart sound feature, meanwhile, “minimizes background noise and enhances the voice of whoever is talking.”

In addition to simply allowing you to make voice and video calls, Portal supports augmented reality, allowing you to apply Snapchat-like real-time filters to your video calls. And there’s a “Story Time” feature that lets you read stories while applying sound effects (which could kind of cool for traveling parents who want to read a bed time story to their young ones from afar).

Other features include support for streaming music from Pandora, Spotify, and iHeartRadio and videos from Facebook Watch, Food Network, Newsy, and more services (to be announced).

Given that Facebook doesn’t have the best track record for protecting its users’ privacy, the company realizes that asking customers to put an always-on mic and camera in your home might be a tough sell. Facebook reportedly delayed the launch of the Portal to address privacy concerns, and now the company says the Portal and Portal+ will both ship with a camera cover and  a one-tap option to disable the camera and mic. You can also restrict access to the device by requiring a four to 12 digit passcode.