F-Droid is a third-party app store for Android apps. What makes it different from the Google Play Store is that while there are some free and open source apps available in Google’s store, the only apps you’ll find in F-Droid are FOSS.

If you don’t care about those things, you’ll find a much wider selection of apps in Google Play. But if you do, F-Droid is pretty much the go-to for finding Android-compatible FOSS.

But while F-Droid has been around for 6 years, the app store is starting to show its age… literally. It looked like something that was designed for Android 2.x. Until now. 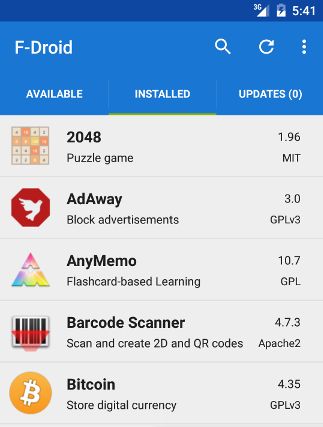 F-Droid’s developers have unveiled a new user interface with a much more modern look.

There’s still a tabbed interface at the top of the home screen, but the colors, tabs, and other design elements all look much more contemporary. And the individual app pages offer a better sense of what to expect from an app before you download it, thanks to screenshots and featured graphics.

Overall, F-Droid has added a few key new features, including:

The new user interface is part of F-Droid v0.103, and an alpha of the new app store should begin rolling out to users soon.