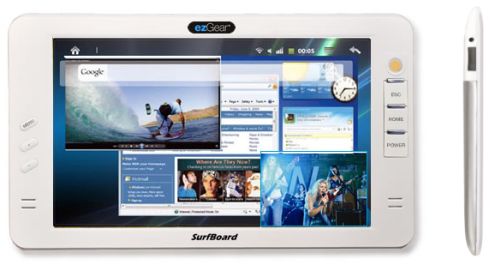 The tablet will run Google Android 2.1, despite the photo above which appears to show a slightly tweaked version of Windows 7. It will have a 1GHz RockChip RK2818 chipset and measure 7.9″ x 4.7″ x 0.6″.

The tablet has 802.11b/g WiFi, 2MP camera, a USB ports, microSD card slot, and an HDMI port. It supports 720p HD video playback even though the display is just 800 x 480 pixels. The ezGear Surfboard 700 has 8GB of built in storage. The company says you should get up to 10 hours of run time while playing videos or 20 hours of audio playback.

The tablet is due out in September, but there’s no word on how much it will cost.