Looking for a small, low-power box that you can use both as a media center PC for playing videos on your TV and as a media hub for backing and sharing your smartphone’s photos and videos?

The folks behind Ezeecube have designed a device that does both of those things. It’s a media hub with up to 1TB of storage. It can backup media from your Android or iOS device. And it runs an embedded Linux operating system with XBMC media center software for displaying your content on a TV.

It’s also a modular device which makes it easy to add more storage or other features. There’s just one catch: you can’t actually buy an EzeeCube yet. But you can help fund its creation by backing the team’s crowdfunding campaign at Indiegogo. 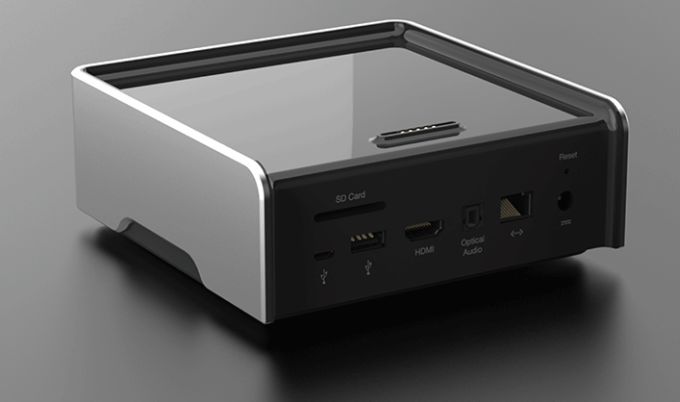 The Ezeecube is basically a small PC with a Freescale i.MX6 ARM Cortex-A9 dual-core processor, 1GB of RAM, 4GB of eMMC storage, and a 1TB 2.5 inch hard drive.

One module is the EzeeDisk stackable hard drives. Each disk adds an extra 2GB of storage to your system and you can add up to 4 units for a total of 9TB of storage.

There’s also an EzeePlay Blu-ray drive. Just stack it on top of the system and you can watch DVDs or Blu-ray videos on the system.

Eventually the team hopes to sell the EzeeCube for $299, but early backers of the crowdfunding campaign can reserve one for pledges of $179 to $249 — although if you’re outside of Hong Kong you’ll have to pay extra for shipping and the first devices aren’t expected to go out until October, 2014.

The campaign will only be funded if the EzeeCube team raises $75,000 or more by July 4th.

13 replies on “EzeeCube is a small, modular media center and media hub (crowdfunding)”