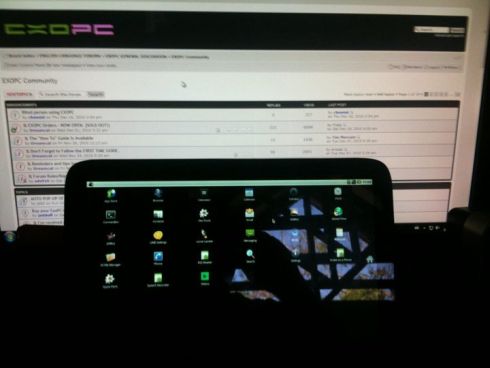 Sure, the first retailer in the US to offer the ExoPC 11.6 inch slate is the Microsoft Store. And sure, the computer runs Windows 7 and a custom user interface out of the box. But when has that ever stopped anyone from installing the OS of their choice on hardware?

An Australian user has posted a video showing the tablet dual booting Google Android 2.2 Froyo. The OS is a recent build of Android-x86, and while it supports all the core Android functions and support for things like wallpapers, it doesn’t currently support the Android Market, which is probably a good thing in this case, since many of the apps designed to run on ARM-based chips probably wouldn’t function properly on a device like the ExoPC which have Intel Atom x86-based chips.

That said, this looks like a pretty nifty project for anyone having a hard time choosing between a Windows slate and an Android Tablet.

You can check out a video after the break. And before you ask why the guy in the video has his shirt off, it’s summer in Australia and apparently it’s quite warm there (and he didn’t expect the shiny screen to act quite so mirror-like).