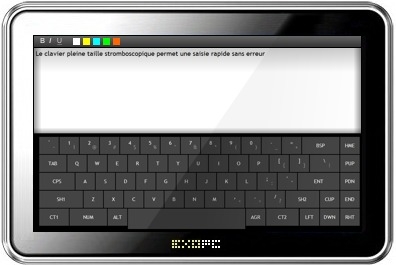 There’s more than one way to support HD video on a tablet computer. Apple’s approach is to skip Adobe Flash playback altogether for the iPad. Other companies are throwing extra hardware in their tablets to support HD video playback. That’s what Fusion Garage is doing with the JooJoo tablet which runs Linux and has an NVIDIA ION graphics processor. And apparently the ExoPC Slate we first covered in February is using the Broadcom Crystal HD video accelerator with Windows 7.

Blogue de Geek reports that the video accelerator in the ExoPC will support hardware decoding of H.264, VC-1, WMV, and MPEG-2 video. That should include HD Flash video, with support for external resolutions up to 1980 x 1088, even though the ExoPC slate only has an 8.9 inch 1024 x 600 pixel display. The tablet also has a 1.6GHz Intel atom N270 processor.

The tipster who sent in that news was using a prototype with 2GB of RAM and a solid state disk. He says the tablet will be released in the US, Canada, and France on September 7th.