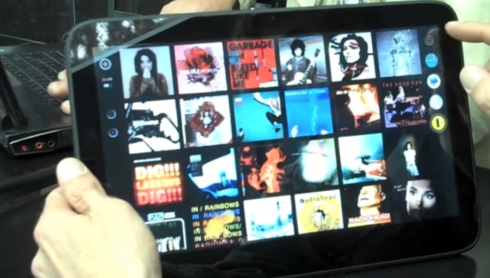 At first glance, the ExoPC Slate looks a lot like your typical iPad knockoff. It has a touchscreen display and a shiny bezel and not much else in terms of hardware. The custom user interface is very touch friendly. But here’s the thing: This tablet is running a full version of Windows 7.

What makes this tablet more exciting than most Windows 7 tablets I’ve seen so far is that ExoPC seems to understand that Microsoft’s attempts to throw a few touch navigation features into Windows 7 doesn’t make the OS as touch-friendly as the iPad. So ExoPC designed a suite of apps that rest on top of Windows 7 to make the tablet easier to use with your fingertips.

Because the system is running Windows 7 under the hood, it includes full support for Adobe Flash, as well as the ability to run full fledged Windows app including Microsoft Office.

The folks at Blogue De Geek got to spend some time with the tablet and they were impressed that it booted Windows in less than 40 seconds thanks to a relatively fast solid state disk. It oculd also handle HD video thanks to the included  Broadcom Crystal HD video accelerator and 11.6″ 1366 x 768 pixel display.

Interestingly, the hardware seems to be pretty much identical to that used for the Neofonie WeTab. The difference is that the WeTab runs a custom version of Linux instead of Windows 7.

The ExoPC Slate has 2 USB ports, an HDMI port, SD card slot, and SIM card slot for optional 3G. It will be available with 32GB or 64GB of storage and a choice of WiFi only or WiFi and GPS.

You can check out a video of the ExoPC slate after the break.