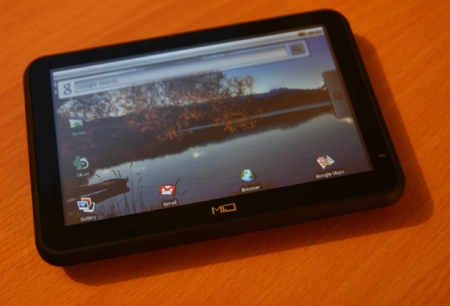 The good news is that eviGroup has begun shipping a 5 inch Android-powered MID (Mobile Internet device) for just €199 in Europe. That’s about $253 US. The bad news is that like almost every other Android powered tablet I’ve seen in recent months, the eviGroup Wallet ships with an antiquated version of Google’s mobile operating syste,

The MID runs Google Android 1.5 which means it won’t run many newer Android apps. It also has a relatively slow 667MHz Samsung ARM 6410 processor and a 5 inch, 800 x 480 pixel resisitve touchscreen display. The device has just 1GB of flash storage, but there’s a micro SD card slot for expansion.

The eviGroup Wallet does have 802.11a/b/g/n WiFi, which is a wider spectrum than you’ll find on most cheap tablets. And EviGroup promises up to 6 hours of run time from the 2,000mAh battery.

You can check out a demo video (in French) from eviGroup after the break.