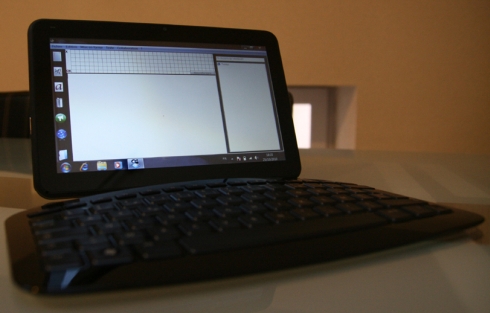 This summer a French company called eviGroup launched a 10 inch tablet called the eviGroup Paddle. It was kind of like a netbook squashed into a slate form factor, with an Atom N270 CPU and 1024 x 600 pixel display, but it had a few premium features including Windows 7 Home Premium and 3G options.

Now the company is back with an upgraded model called the Paddle Pro. The new tablet still has a 1024 x 600 pixel 10 inch display, but the CPU has been bumped up to a 1.66GHz Intel Atom N450 chip. The Paddle Pro has a capacitive touchscreen display — but that’s not the only way to interact with the device, because it also features head-tracking technology which lets you control the computer just by looking at it (and then moving your head). The tablet also comes with a wireless keyboard.

Without an operating system, the eviGroup Paddle Pro runs 890 Euros, or about $1200 US. The price goes up to 990 Euros ($1340 US) when you ad Windows 7 Home Premium and eviGroup’s software. You can also pay extra to get the tablet with 2GB of RAM and a 320GB hard drive.