Google may be preparing to expand its line of Nexus tablets. We already know that the company will introduce new Nexus 7 models with 32GB of storage and 3G capabilities. Now it looks like the company is also getting ready to introduce a 10 inch Nexus tablet, possibly built by Samsung. 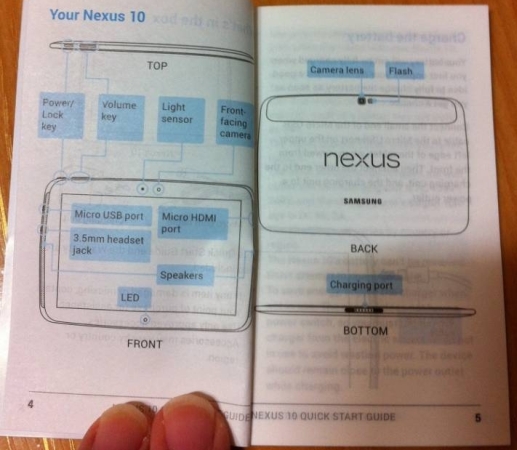 This week a few photos allegedly showing a user manual for a Samsung Nexus 10 tablet showed up on Korean website Seeko.

Of course, it’s possible to fake that kind of thing… but now Google vice president Vic Gundotra has gone and posted a few vacation photos to Google+ that appear to have been taken from a Nexus 10 device.

That kind of data can also be faked… but it seems highly unlikely that Gundotra would go through the trouble.

Benchmark results that showed up online recently also suggest that the tablet may be powered by a Samsung Exynos 5 ARM Cortex-A15 processor and Android 4.2 software. It could also have a high resolution 2560 x 1600 pixel display.

Yeah, those could be faked too… but Gundotra’s photos are almost certainly real.

So it looks like Google is testing a Nexus 10 tablet. If the user manual photos are accurate, it will have a micro USB port, micro HDMI port, front and rear cameras, and a charging port. No surprises there. We’ll probably have to wait at least a few days to find out what kind of processor or other specs the device has.

Google is holding an event on October 29th, where the company is expected to introduce new products including the next Nexus smartphone (probably built by LG), as well as the new Nexus 7 and possibly this new 10 inch Nexus tablet. We may also see the introduction of Google Android 4.2 on Monday.

In other words, the Google Play Store is about to get more crowded. The company also recently started selling the $249 Samsung Chromebook through the Play Store.

via Android Central and The Verge