It’s been years since Google released an Android tablet, but that’s set to change in 2023 with the launch of the first Google Pixel Tablet. While the company hasn’t said much about the upcoming tablet other than that it exists and has a Google Tensor processor, a series of leaks are starting to paint a picture of what to expect.

Signs point to the Google Pixel Tablet being a budget or mid-range device with the same processor as the Pixel 6, 6 Pro, and 6a smartphones. But there may also be a Pixel Tablet Pro for folks looking for something a little more powerful. 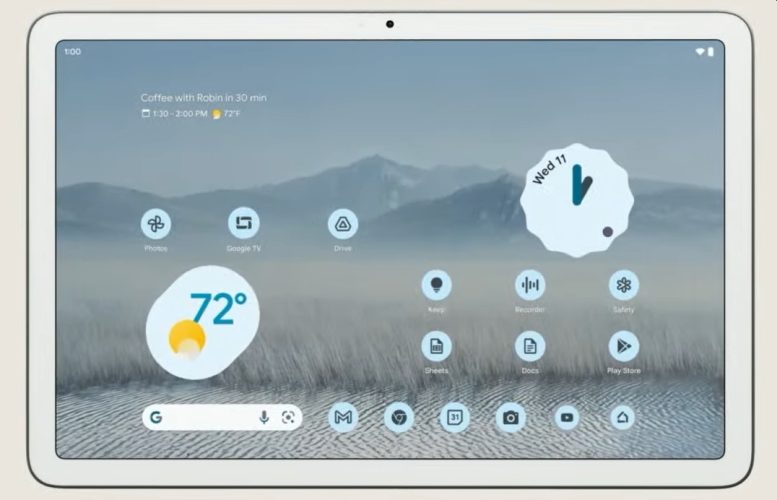 Here’s everything we know about the Google Pixel Tablet so far.

According to documents and source code uncovered by Kuba Wojciechowski, the Pixel Tablet will have a 10.95 inch touchscreen display, support for a USI stylus, and a 1st-gen Google Tensor processor.

It’s unclear how much RAM the tablet will have, but it looks like it will be available in 128GB or 256GB storage variants. Given Google’s track record with removable storage in recent years, I’d be very surprised if it has a microSD card slot.

The tablet is expected to have 8MP Sony IMX355 cameras on both the front and back. It supports WiFi 6 and Bluetooth, but there’s no support for GPS and most likely no 4G or 5G cellular option.

Google will ship the tablet with Android 13 software, and it’s expected to be one of the first devices to ship with a 64-bit only version of the operating system, which means some older Android apps that haven’t been updated in years may fail to run properly. But the move could streamline the operating system code for better performance with apps that are supported. Wojciechowski guesses that the Pixel Tablet could ship with as little as 4GB of RAM.

There’s also expected to be a Nest Hub mode that allows you to use the tablet as if it were a smart speaker or smart display when connected to an optional docking station. There’s a USB-C port on the bottom of the tablet as well as stero speakers.

The Pixel Tablet is known internally at Google by the code name Tangor or T6. But there’s also evidence that a Tangor Pro or T6 Pro model could be in the works with a 2nd-gen Tensor processor and other premium specs. We don’t know much more about that model yet though.

via Kuba Wojciechowski (1)(2)(3) and @MishaalRahman