The makers of the Evercade handheld game console that was introduced last year are launching a new model designed for the living room.

The Evercade VS doesn’t have a display or a battery, but it has one killer feature that the portable model lacks: support single-screen, multi-player games. You can plug the Evercade VS into your TV, connect up to four game controllers, and play with or against your friends or family.

You’ll be able to pre-order an Evercade VS for $100 and up starting May 28th, and it’s scheduled to ship this fall. 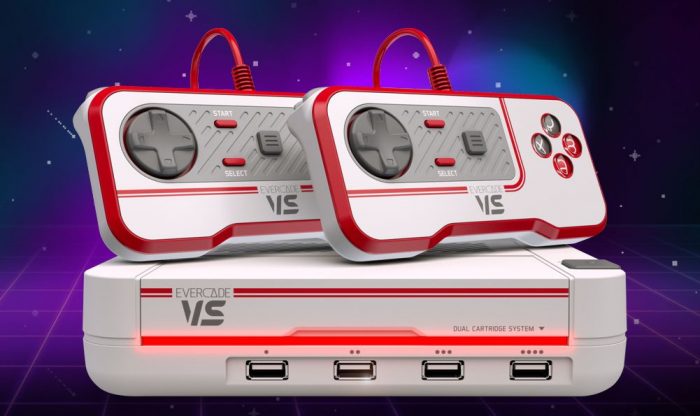 Like the original Evercade, the new home console supports hundreds of fully licensed classic games. They come on cartridges that sell for about $20 each, and which include a bundle of games, and Evercade says there are over 260 games available from more than 20 cartridges released to date. I only see 18 cartridges on the company’s website at the moment though.

Evercade also notes that not all existing cartridges will work with the new console. The Namco Museum collections are only licensed for the handheld, for example, so you won’t be playing Pac-Man or Galaga on the VS unless Evercade works out a new licensing deal.

The $100 starting price gets you a package with a game console, a single controller, and one game cartridge.

Evercade says the new console features a 1.5 GHz quad-core processor and 512MB of RAM, but since it’s designed to play license games rather than a random collections of ROMs you downloaded from the internet, you shouldn’t have to worry that it won’t be powerful enough to handle the titles you want to play.

If you already have an Evercade handheld device and/or some existing cartridges, they should be playable on the new Evercade VS. But not only will they now support multiplayer mode (assuming the original games had that feature), but you’ll also get support for 1080p output (up from 720p with the handheld), and support for connecting two cartridges to the console at the same time, allowing you to choose from as many as 40 games at once without having to eject a cart.

Another new feature in the Evercade VS? It supports WiFi. So far that’s just for downloading over-the-air updates, but it could possibly open the door to additional features like video streaming or online game play in the future.

And since the game controllers for the VS connect to USB ports, you can also opt to use third-party controllers including wired or wireless options (assuming your wireless version has a USB receiver rather than relying on Bluetooth or WiFi). You can even use the Evercade handheld as a controller.

If you don’t want to wait for the home version, the Evercade handheld is still available for purchase. You can pick up a starter pack with the console plus a single cartridge for $83 and up, or a Premium Pack that includes three cartridges for $100.