Eve-Tech plans to launch a crowdfunding campaign for the upcoming Eve V tablet on November 21st. But after soliciting ideas for the tablet’s design from members of the Eve community, the company is revealing a few more details about the tablet’s specs.

We already knew that the tablet would feature an Intel Kaby lake processor, a 12 inch display, and a Microsoft Surface-like 2-in-1 design that lets you use the tablet with a detachable keyboard cover. 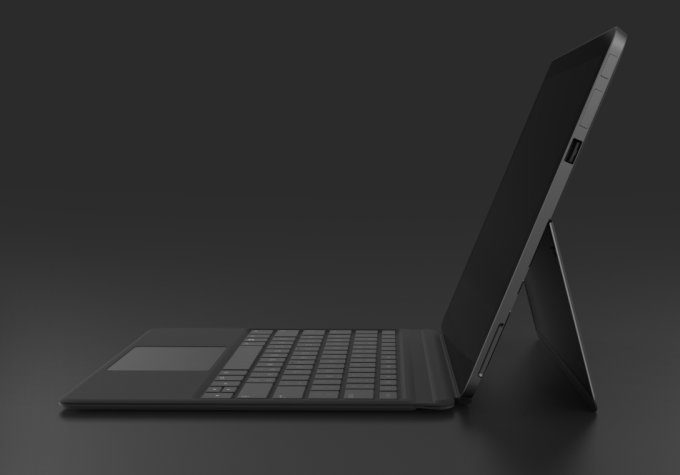 While the tablet obviously borrows some inspiration from Microsoft’s Surface Pro family, there is at least one key difference: the latest Surface Pro tablets are powered by Intel Core M3, Core i5, or Core i7 Skylake chips, the Eve V will feature Intel Kaby Lake processor options, including:

Eve’s tablet also has a Thunderbolt 3 port, a USB 3.1 Type-C port, and two full-sized USB 3.1 ports, while the Surface Pro 4 has just a single USB 3.0 port and a Mini DisplayPort. 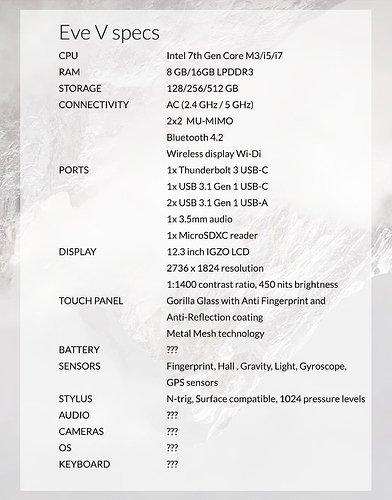 As for the Eve V’s display, it’s said  to have a 3:2 aspect ratio, a 1:1400 contrast ratio, 450 cd/m2 brightness, and optically bonded glass, which the company says should help make it sunlight viewable (although if I’ve learned anything from reading iFixit teardowns, it’s that this also makes it tougher to repair a broken screen).

Eve has also confirmed that the tablet will ship with metal-mesh touch panel with support for 10-finger multitouch input. The Eve V also supports Windows Ink and can work with an N-Trig digital pen with 1024 levels of pressure sensitivity, but the pen will be sold separately. The tablet also supports pens designed for the Surface 3, Surface Pro 3, or Surface Pro 4 tablets.

Other new details include the sensors: the Eve V has a gravity sensor, light sensor, gyroscope, a fingerprint reader, and a hall sensor.

The goal is to also include GPS, but there’s a chance that it will only be available in the upcoming 4G LTE model of the tablet, since that version will most likely have a different case design to ensure better support for cellular and satellite signals.

Eve hasn’t revealed the official pricing for the tablet yet, but an entry-level model is expected to cost less than $900, while a top-of-the-line version shouldn’t cost more than $1800.