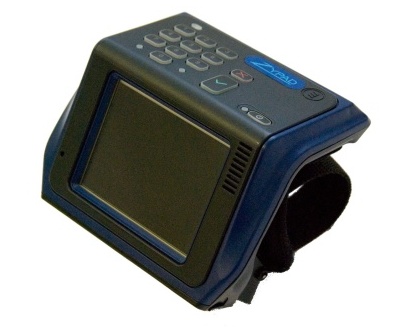 I feel like every few years I used to see stories about Dick Tracy-style wearable computers that would let you make voice and video calls using a wristwatch-sized device. And then smartphones and tablets kind of took over and you didn’t really see many wristwatch-style computer designs. But wearable computers still have a place in some industries, and the folks at EuroTech have introduced a new model called the Zypad WL 1500 that crams outdated mobile tech into a wrist-sized device and it’s kind of awesome… kind of.

The Zypad WL11x features a 3.5 inch, 320 x 240 pixel color TFT display with a resistive touch panel and it’s designed to worn on your wrist like a watch.The device features 802.11b/g/ WiFi, Bluetooth, GPS, and optional 3G. It has a 2.5 inch audio jack, a speaker, and an integrated mic, and an ambient light sensor. There’s also a USB port with host capabilities and a micro SD card slot and you can get an optional barcode scanner.

The wrist computer isn’t exactly a speed demon. It has a Marvell PXA320 processor, which was introduced about 5 years ago. The little guy is also saddled with Windows CE 6.0.

The Zypad WL 1500 isn’t really designed to be a consumer device. Instead it’s positioned as a solution for medical, transportation, and defense industries, among others.