European Union regulators say Google has abused its dominant position in the smartphone operating system space to pressure phone makers into including Google Search and the Chrome web browser on their devices, stifling competition.

In response, the EU has fined Google 4.34 billion Euros (about $5.04 billion US) and ordered the company to end the conduct within 90 days or face further penalties.

Google plans to appeal the ruling. 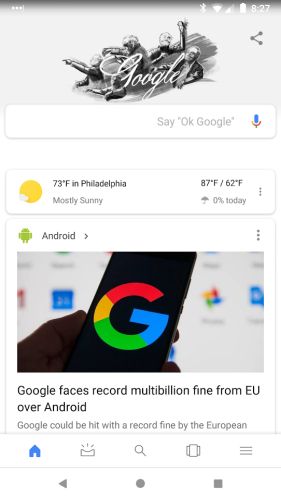 At the core of the EU’s complaint is Google’s practice of working out deals with phone makers that allow them to install the Google Play Store only if they also load up their phones with other Google apps including Search and Chrome.

While Google releases Android as open source software, the Play Store and those other apps are not open source, which means that device makers cannot just pick and choose which they’d like to include… but shipping a phone without the Play Store would doom it to failure in most markets outside of China (where the Play Store is not available).

That hasn’t stopped Amazon from building its own Android-based Fire OS and shipping tablets and smart TVs powered by the operating system and featuring the company’s own app store. But even Amazon failed to make a dent in the smartphone market when the company tried shipping a Fire OS phone a few years ago.

Not only is Google said to have worked out deals that prevent mobile device makers from shipping phones and tablets with just the Play Store and no other proprietary Google apps… but the EU complaint says Google also prohibits companies who sell phones that meet Google’s requirements from also selling any other devices that ship with an Android fork that does not. So if Samsung, Motorola, HTC, or LG wanted to follow in Amazon’s footsteps and build their own version of Android complete with their own apps and services, they wouldn’t be allowed to continue shipping phones with the Play Store at all. 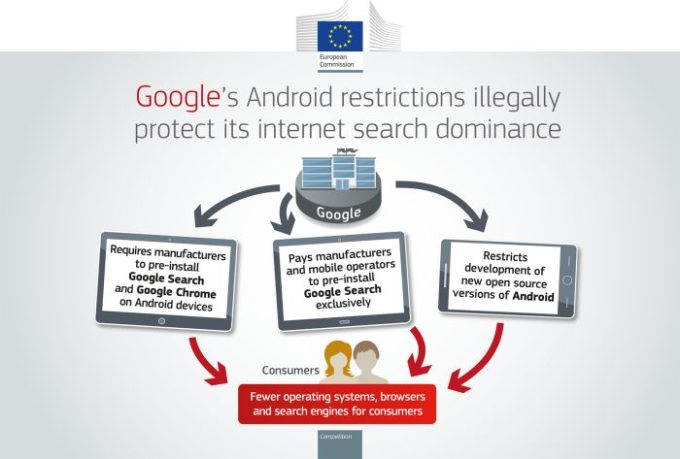 Google’s counterargument is that by making Android available for anyone to use for free… and by offering a set of Google apps that make it easy for any manufacturer to bring a phone to market without worrying too much about developing software in-house, the company has increased consumer choice rather than stifled it.

Of course, a big part of that equation is “free.” The only reason Google can afford to spend resources developing a mobile operating system that it gives away is because it expects to make money by driving users to its search engine and other tools that generate revenue through advertising and other means. The unwritten implication is that if Google has to allow phone makers to ship phones with a different default search engine, the company might have to start charging for its software which could have a major impact on the price of producing Android phones for device makers and the end price for consumers.

This is the latest in a line of major antitrust decisions from the EU commission, so it’s unclear how successful Google’s appeal will be. But I’m not surprised the company is trying.

The $5 billion fine, by the way, is the biggest ever. But as Reuters points out, it amounts to just about two weeks of revenue for Alphabet, Google’s parent company.

A bigger threat to Google’s bottom line may be the ongoing penalty if the company fails to change its behavior in the next three months: the EU will levy a penalty of “up to 5% of the average daily worldwide turnover of Alphabet.” While Google could probably even afford to swallow a 5% hit to its profits as the cost of doing business, I doubt that’s something Google officials really want to do.