Want to boot Ubuntu, Fedora, Clonezilla, or another operating system from a USB flash drive? There are a number of tools designed to help you burn a disc image to a flash drive, but a new utility called Etcher is one of easiest to use that I’ve found. 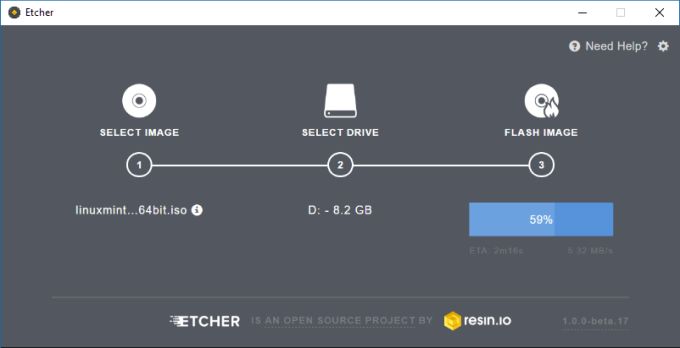 Etcher is an open source, cross-platform tool that’s available for Windows, Mac, and Linux, and it looks virtually identical on each platform. So you if you’re trying to explain to someone how to burn a disc image, you don’t need to provide different instructions for each operating system.

That’s pretty much it. The app will burn the image to your USB drive, make the drive bootable, and then validate the install to make sure there were no problems.

Want to know how it does all of those things? You can find the source code at github.

Etcher doesn’t give you as many customization option as some other disk burning tools I’ve used, such as UNetbootin, LinuxLive USB Creator, or Rufus. And if something goes wrong, there’s not much troubleshooting you can do. But in terms of ease-of-use, it’s the hands-down winner, which could make Etcher worth checking out… although I’d recommend advanced users keep a tool like Rufus around for times when Etcher just isn’t enough.