Earlier this year I got an early look at a 12.5″ portable display called the Lapscreen that measured just 3.6mm thick at its thinnest point, but 7.9mm at its thickest.

Now an Australian company called Espresso Displays has unveiled a new set of super-slim portable touchscreen monitors that are just 5mm thick when measured at any point.

The only catch? You can’t actually get your hands on one yet — Espresso Displays is running a Kickstarter campaign for its portable monitors, and hopes to begin shipping them in February, 2020. 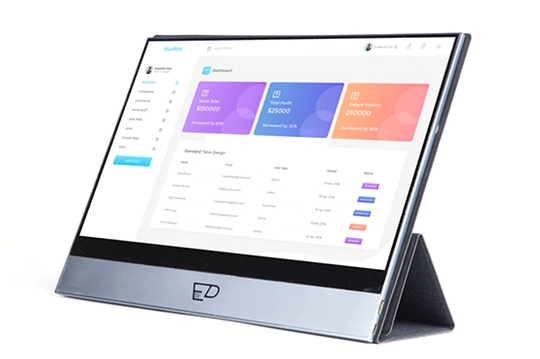 The displays come in 13.3 inch and 15.6 sizes, feature USB-C and mini HDMI ports, and they’re designed to work with accessories that let you use them at home or on the go.

One of those accessories is a flip case that covers the display when you’re not using it for easy transportation, but which also folds in a way that lets you use the case as a stand for propping up the display at two different angles.

Another accessory is called the MountGo and it’s an adjustable stand that you can set up on a desk. There’s also a Mount Pro VESA adapter.

Espresso Displays says its screens are 1920 x 1080 pixel monitors with glass front panels and anodized aluminum bodies, support for up to 300 nits of brightness, and an 800:1 contrast ratio. They have a 170 degree filed of view and support for 10-point multitouch input. As a stretch goal, Espresso also plans to offer a stylus.

The company says the expected retail price for the 13.3 inch model will be about $320 in US dollars, while the 15.6 inch model will go for about $350. But backers of the crowdfunding campaign can pick them up for around 40-percent off.

One weird thing about the campaign? It shows the same specs for both screen sizes — including weight. Both are said to weigh 690 grams (about 1.5 pounds), which seems… weird. I don’t know which version will have that weight, but I’d be surprised if both models did.