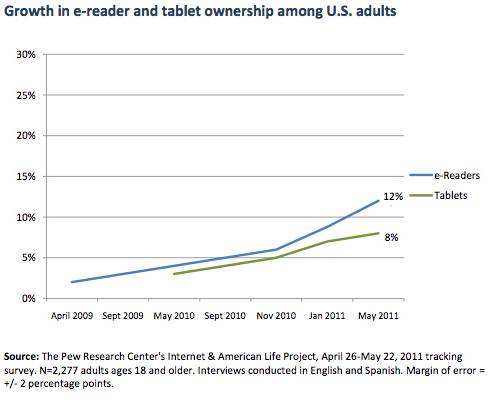 It seems like a week doesn’t go by without the launch of a new tablet device for surfing the web, viewing media, reading eBooks, and running apps. But most of the high profile tablets available cost $400 or more. You know what’s a lot cheaper? An eBook reader such as the latest NOOK, Kobo, or Kindle eReaders. They also have batteries that last for weeks or months rather than hours or days.

So I’m not all that surprised to see a Pew report out today showing that eReaders sales are growing at a faster rate than tablet sales. When dedicated eBook devices first started to hit the market they cost hundreds of dollars and only a small group of people could justify spending that kind of cash on a device that simply lets you read books — which you still need to buy separately.

Now the base price for the most popular eReaders is around $130 to $140, and it’s not unusual to find an older model on sale for under $100.

According to Pew’s study, the percentage of US adults who own an eReader doubled in the six months from November, 2010 to May 2011. That’s in increase from 6 percent of the population to 12 percent.

Pew’s report doesn’t make any guesses as to why people appear to be buying eReaders in growing numbers while the share of US adults who own tablets has been pretty much flat at 7 percent since January and up only 3 percent since November. But if I had to guess I’d put my money on… money. Cheap eReaders are a lot more attractive than the eReaders of yesteryear, and they’re attractive alternatives to high priced tablets if you just want to read books or possibly web pages since most recent eReaders also have web browsers.

It’s also interesting to note that while the eReaders were most likely to be found in households earning over $30,000 per year, households with incomes of over $75,000 were nearly twice as likely to have an eReader than those making less money. Clearly, a $140 item isn’t an impulse by for everybody — so of course a $500 iPad isn’t either.