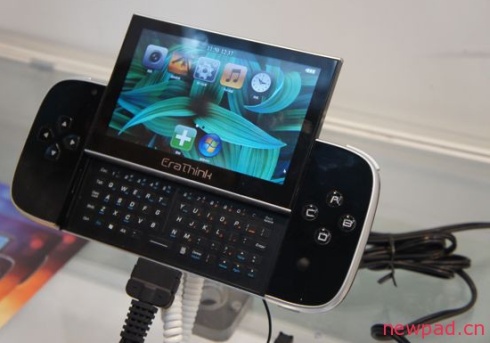 A Chinese company called EraThink is showing off a new handheld PC device which looks like a video game console. But while the EraPalm5 has a slide-out screen covering the keyboard and joystick buttons on the left and right sides, it’s no PSP. Instead the machine features an Intel Atom Z-series processor and runs Windows 7.

The EraPalm5 has a 5 inch, 800 x 480 pixel capacitive touchscreen display and can handle 1080p HD video playback. It supports WiFi, 3G, and GPS connectivity, and there’s an optional dock that adds support for HDMI, VGA, and USB capabilities — although it’s one of the least attractive looking docks I’ve seen.

This isn’t the first time we’ve seen a company try to cram an Intel Atom-powered PC into a device that looks like a Playstation Portable. OCOSMOS has been showing off similar designs since last year, but so far neither EraThink nor OCOSMOS have brought their Windows gaming handhelds to market.

One reply on “EraPalm5 handheld PC looks like a gaming console”