There’s no shortage of ways to charge a phone. You can use a wireless charging pad, a solar charger, plug it into your PC, or you can go old school and just plug your phone into a wall jack. Soon you may be able to charge your phone using a hot or cold beverage.

Epiphany Labs is raising funds on Kickstarter for a product called the onE Puck which is a kind of coaster that generates electricity by differences in temperature. Place a hot or cold item on the surface of the coaster and it will start to generate electricity — which you can use to charge a phone or other mobile device. 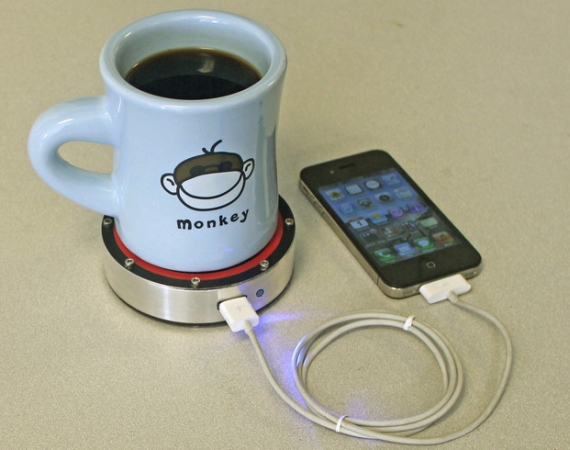 There are a few reasons to keep your expectations for this sort of device low. When operating at full capacity, it can generate enough power to fully charge a phone in about the same amount of time it would take if you were plugged into a wall outlet.

But it’s not likely that the onE Puck will run at full capacity very often. You need a very hot or very cold beverage in order for it to work best — and odds are your cold drink will warm up or your coffee or tea will cool down before you’ve fully charged your phone.

Under those circumstances, the device will store what charge it generates and send it in short bursts to your phone or other device. It doesn’t conduct enough electricity to charge larger items like iPads.

The good news is that you don’t need a beverage at all — you just need to be able to make sure the top and bottom surfaces of the device are different temperatures, which means that you could place it on a cold windowsill or other area to generate a little juice for your phone.

Ephinay Labs says the technology is based on a Stirling engine — something that’s been around for almost two hundred years, but which hasn’t been widely used in consumer electronics.

Epiphinay’s main business at the moment is making solar powered water systems which are used in developing nations to purify drinking water in areas without reliable access to electricity.

While the onE Puck is a consumer device, Epiphany is hoping to use the project as a testing ground for technology that could be used in future water purification systems or other larger-scale products.

So if the $115 asking price for a onE Puck seems a bit high, that’s because you’re not just making a Kickstarter pledge to pre-order a device that may or may not fully charge your phone. You’re helping the company develop technologies that could improve access to power and water in the developing world.

Apparently that’s not as tough a sell as it sounds — the project is already two thirds of the way toward meeting its $100,000 fundraising goal and there are more than 50 days left to go in the campaign.