Over the last decade or so, it’s gotten more difficult to upgrade personal computers. Most smartphones and tablets, many laptops, and even some desktops have processors and other components that aren’t meant to be replaced.

But for the past few years the folks at Rhombus Tech have been working on the EOMA68 project to build a modular PC platform that would allow you to upgrade the hardware on a notebook, tablet, or other device by swapping out a card with the CPU, memory and storage. Want to upgrade your notebook’s performance while keeping the display, keyboard, and other hardware? Just swap out the EOMA68 card.

At least that’s the idea. Execution has been rather slow going… a tablet project never got off the ground, and the latest version of the EOMA68 card is using a pretty old, low-power, ARM-based processor.

That said, developer Luke Kenneth Casson Leighton is showing off an interesting application of EOMA68 technology: a laptop powered by the board. 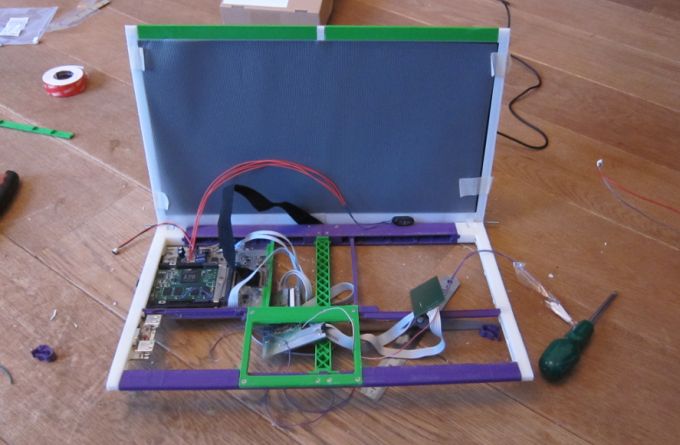 The Libre Laptop isn’t exactly a super-computer. It has a 15.6 inch, 1366 x 768 pixel display and use a microSD card for storage and the EOMA68 card that powers the laptop features an Allwinner A20 ARM Cortex-A7 dual-core processor.

But there are a few nifty things about the Libre Laptop: It uses a 4.3 inch capacitive touchscreen display as a touchpad, it’s designed to run (mostly) free and open souce software), and theoretically it should be pretty customizable, since it’s basically a PCB, some off-the-shelf components, and a bunch of 3D-printed parts.

The prototype features a 10,000 mAh battery, an external USB port for peripherals as well as a few internal ones for wireless cards, storage, or other hardware.

While the idea of an upgradeable laptop is pretty intriguing, right now this is a device only an enthusiast of modularity and open source software could love. It’s not particularly powerful, and there isn’t really any upgrade card that would offer better performance yet… and there may never be. But you have to start somewhere, right?

There is at least one other EOMA68 CPU card in the works though: testing is underway on a model with an Ingenic JZ4775 MIPS-based processor.