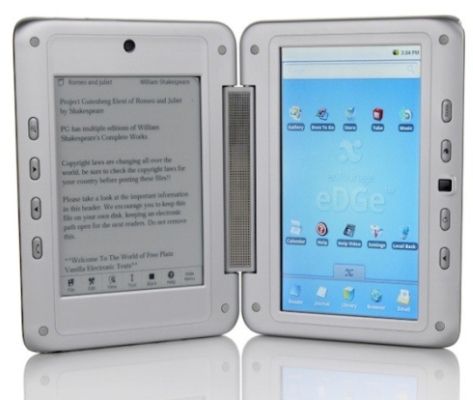 The enTourage eDGe and Pocket eDGe are two of the most bizarre mobile devices to hit the market in the last few years. They’re dual-screen devices running Google Android. One screen is an E Ink display while the other is a color LCD. You can run Android apps on the LCD screen or read eBooks in the black and white screen, and transfer notes and pictures between them.

But the eDGe models cost more than a typical eBook Reader, ways more, and haven’t been associated with a major book retailer, which may have made it a tough sell for the eReader crowd. For folks interested in Android tablets, on the other hand, the eDGe and Pocket eDGe just seem to have extra screens.

So I’m hardly shocked to see that the enTourage eDGe content store has closed. The company is instead directing users to the Google Books store, where they can purchase titles to read on the mobile device. The company recommends users install the Amazon Appstore if they’re interested in downloading Android apps for the eDGe devices.

You can still find the enTourage eDGe and Pocket eDGe devices at a number of retailers if you’re still interested. But there are rumors floating around suggesting the company isn’t just closing its content store, but also its hardware business — so I wouldn’t necessarily hold my breath waiting for software updates and support for the company’s existing products.