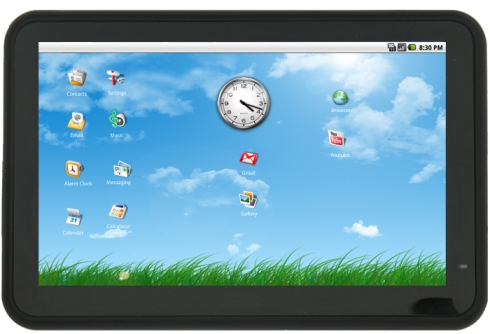 Update: As several commenters had pointed out, all signs point to this being a scam. Nobody has received a single unit yet, and it appears the company hasn’t actually placed any orders for the tablet with the Chinese manufacturer responsible for making them. More details at Engadget and ycombinator.

Update 2: It looks like some units are actually shipping.


With Apple, HP, and other tablet makers duking it out for dominance in the $500 and up space, it looks like the battle for the budget tablet market is also heating up. I recently reviewed the Archos 5 Internet Tablet, which was released last year, making it one of the first available tablets running Google Android. It’s a bit rough around the edges, but it’s hard to argue with the $250 starting price tag — at least until you check out the Enso zenPad, another tablet with a 5 inch display that’s selling for just $155 plus $25 for global shipping.

The zenPad has an 800 x 480 pixel touchscreen display, 8GB of storage, and a 667MHz Samsung 6410 processor. It runs Google Android 1.6 and comes with built in GPS and WiFi. You can pick up a 3G adapter for $35 more, although you’ll have to plug it into a USB port.

The Archos 5 still has the edge when it comes to media playback. Archos loads up the tablet with some excellent audio and video software that can handle a wide range of file formats. But it’s even harder to complain about a $155 price tag.

If you’re looking for something a little bigger, the Camangi WebStation has a 7 inch display, runs Google Android, and starts at $275. But it gets lukewarm reviews and appears to be mostly out of stock at the moment.