Most wireless charging systems require you to place your phone, tablet, or other gadget directly on or very close to a charging surface. But Energous has a solution that can let you charge devices from up to 15 feet away.

It’s called WattUp, and it beams power to you devices over RF, while using Bluetooth to detect when your devices are in range. If they’re not nearby or don’t need to be charged, WattUp won’t waste any power trying to charge things that aren’t there.

Energous designed the WattUp standard, but the the company isn’t making its own hardware. Instead, Energous is partnering with other companies and we could start to see the first WattUp wireless chargers and chargeable gadgets later this year… but don’t expect to be able to charge your phone from across the room just yet. 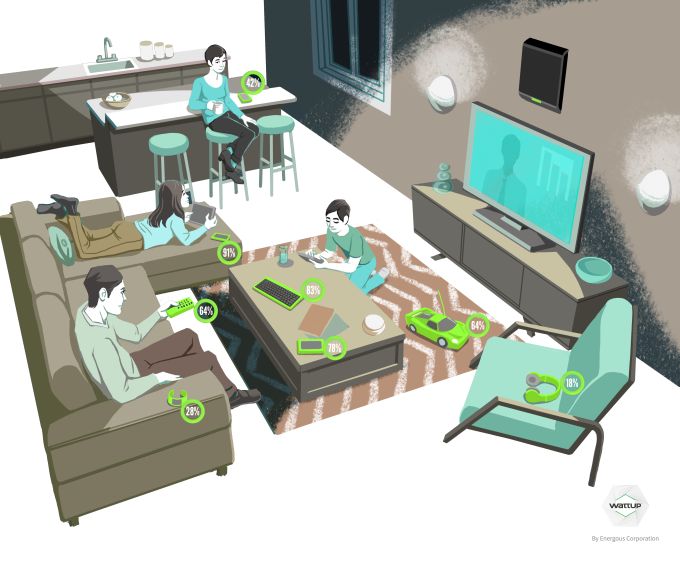 The first devices expected to ship will be based on the company’s new miniature WattUp transmitter. The design calls for a little device that you can plug into the USB port of your computer (or wall or car charger). It can then transmit power to a receiver an inch or two away.

The FCC certification for this type of device is a bit simpler than for larger, higher-power transmitters that can work over longer distances. Unfortunately, the tiny device doesn’t really crank out enough power to charge your phone. 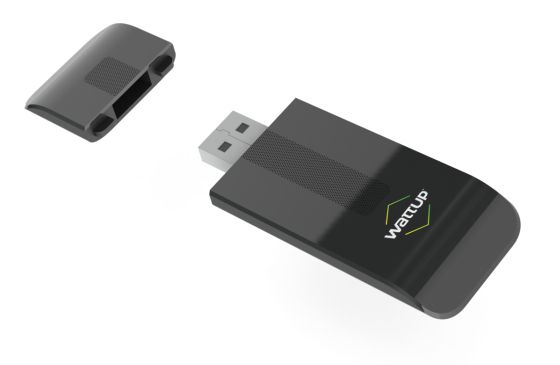 Instead, think of it as something that you can use to recharge a fitness tracker or Bluetooth headset while you’re travelling. You can leave your USB charger at home… or maybe you’ll be able to buy devices that don’t even have a USB port.

Energous isn’t ready to announce the names of any partners yet, but by the end of 2016 we should see wearables that work with this type of USB-sized solution. The chip that goes in the wearables measures just 3mm x 3mm, making it small enough to include wireless charging in devices that are probably too small for Qi or Powermat-style systems.

For example, in this image, you can see a prototype WattApp system powering an LED light array that doesn’t even have a battery, while I hold it above the transmitter. 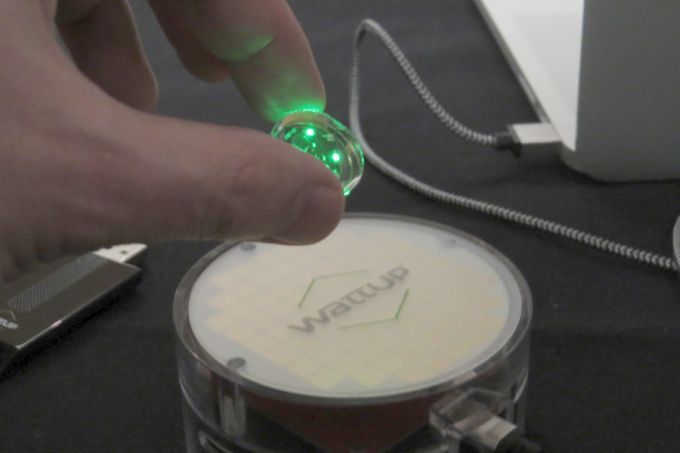 Eventually, Energous sees its technology being built into larger base stations that can transmit power over greater distances. Or maybe instead of a standalone transmitter, you might be able to buy a TV that has antennae spread throughout the bezel to transmit power across your room.

WattUp isn’t quite as efficient as inductive or resonant charging solutions. And it’s certainly not as efficient as a wired charger. But it’s a lot more convenient: you could be able to charge your phone any time you walk into your home, never worrying that it will run out of juice while you’re on the couch.

There are some limitations. Right now even the most powerful WattUp system is only designed to charge devices that use less than 10 watts. So we’re talking about something that can charge wearables, phones, tablets, and security cameras… but not most laptops or other higher-power gadgets.

And device makers will need to build the technology into their hardware before you can actually buy a transmitter and use it for anything… Energous says a “tier 1” consumer electronics company has a bunch of products in the pipeline, so some phones and other products are on the way. That company also has a 1-year exclusive on devices in those product categories though, so it might be a little while before you can choose from a range or devices from different brands.