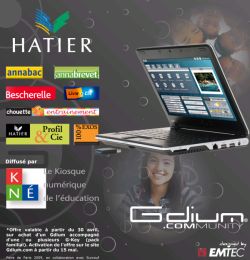 The Emtec Gdium Liberty netbook is set to go on sale in France at the Paris Fair this week for €349.

While most netbooks available today feature Intel Atom processors, 160GB hard drives, and Windows XP, there are a few companies thinking outside the box. And few of them are further outside the box than Emtec. The Gdium Liberty netbook eschews the Intel Atom processor for a MIPS-based 900MHz Loongson processor. And instead of Windows XP, the laptop comes with a custom version of Mandriva Linux with a series of widgets to give you quick access to information on your desktop or from the web.

Perhaps the most unusual thing about the Emtec Gdium Liberty is that while most netbooks use either a hard drive or cheap solid state disk with flash storage, the Gdium’s operating system runs from a removable USB flash drive. The idea is that multiple people can use the same computer, but carry their entire operating environment around with them in their pockets.

I got a chance to catch up with the folks behind the Gdium Liberty at CES. You can check out a video overview of the interface and an interview with one of the engineers behind the laptop after the break.