The Emtec Gdium Liberty 1000 netbook is made from a different mold than most of the mini-laptops available today. I mean sure, it has a 10 inch, 1024 x 600 pixel display and it’s about the same size and shape as every other 10 inch netbook. But it shuns the usual Intel Atom processor for a 900MHz Loongson CPU and instead of a hard drive the computer has a removable USB key called the G-Key. Not only can you store files on the removable key, but the entire operating system runs off the USB flash drive, making it easy for multiple users to share the same netbook without getting their settings and data crossed. 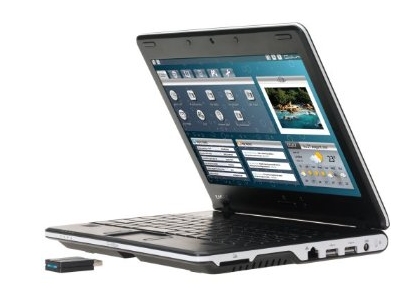 When the laptop was first released this summer, it cost €349, or more than $500. But today it’s available for far cheaper. Netbook Italia spotted it for €199 ($293 US). So I did a little digging and found that it’s even cheaper in the US, where you can pick it up from Amazon for $265.99 plus free shipping

Because the Emtec Gdium Liberty 1000 uses a MIPS based CPU instead of an x86 based one, it can’t run Windows XP, Vista, or 7. Instead it ships with a custom version of Mandriva Linux that includes a series of widgets for interacting with desktop and web services. You can check out a video of the software interface I shot at CES in January after the break. Keep in mind, some of the software may have changed since then.