Budget Android tablet maker Ematic introduces a 7 inch FunTab tablet for children a few months ago. Now the company is expanding the FunTab family with new models with smaller and larger screens. The 7 inch model is also getting updated with new processor options. 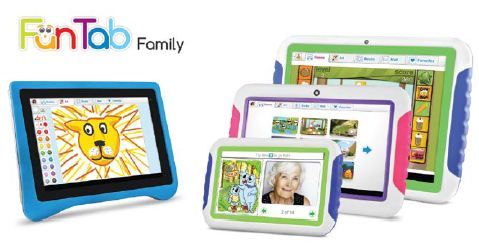 All the tablets feature kid-friendly software including a simplified Android 4.0 user interface, an app store with age-appropriate apps and games, and semi-rugged case designs.

Here’s a run-down over the new tablets:

You also get a mini USB port, microSD card slot, a rear camera, and up to 8 hous of battery life with this model.

Unfortunately you also get a resitive touch display.

The only tablet that just gets to wear the FunTab name without any letters or words after it is a 7 inch model with a capacitive touchscreen, a 1.2 GHz processor, an 800 x 480 pixel display, 512MB of RAM, and 4GB of storage.

It has the same range of ports as the Mini, but this model has a 2MP rear camera as well as a front-facing VGA camera.

Ematic says the FunTab should get up to 5.5 hours of battery life. It has a list price of $120, but Walmart shows a retail price of just $100.

The Pro is a 7 inch model with the same screen as the amateur model, but this $150 version has a 1 GHz processor, 1GB of RAM, and 8GB of storage.

It also has a mini HDMI port in addition to all the other goodies found on the standard FunTab, and up to 8 hours of battery life.

It has front and rear cameras and HDMI output.