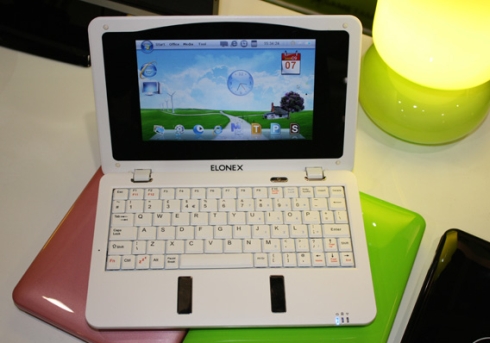 Elonex has been making low cost netbooks and ultraportable computers for about as long as anyone (which is to say, for about a year or two). The company’s Elonex One netbook was the first to sell for under £100 in the UK. Now Elonex is showing a new breed of mini-laptops with ARM-based processors and Windows CE.

The Elonex Smartbook has a 7 inch screen, 2 USB ports, a flash card reader, and audio jacks. It comes with a USB to Ethernet adapter, since the tiny netbook doesn’t have room for a full sized Ethernet port.

Netbook Italia spotted the Elonex Smartbook at the IFA trade show in Berlin last week. The company was also showing off its latest Elonex WebBook, which is a 10 inch netbook with a VIA processor, as well as a prototype for a new netbook that would have an integrated TV tuner.