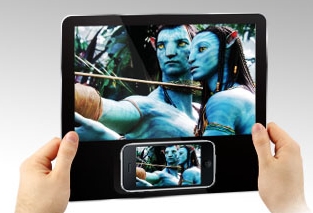 The Elonex iDock XL is basically a large display with a space for docking an iPhone. When the iPhone is in place, you’ll be able to display photos or videos on the big screen while controlling everything using the iPhone’s touch gestures. Swiping your fingers at the big display won’t do anything.

Because Apple limits the video output of the iPhone, the iDock XL will only display photos and videos out of the box. But if you’re using a jailbroken iPhone anything that displays on your phone should show up on the big screen.

But here’s what you don’t get: A faster processor, a higher resolution display, the ability to run iPad-specific applications, the ability to touch the large screen to perform actions, or the respect of your peers.