The Electric Jukebox Company has unveiled a dedicated device that does just one thing: stream music.

The Electric Jukebox is a Chromecast-like dongle that connects to your TV’s HDMI port. Using a Wii-style controller, you can find and listen to music through your home’s most important entertainment center.

Unlike a Chromecast, Sonos, or other music streamer, the Electric Jukebox won’t support third-party apps. Instead, users will have access to a catalog of songs from Electric Jukebox. A 1-year subscription is included in the cost of the hardware. 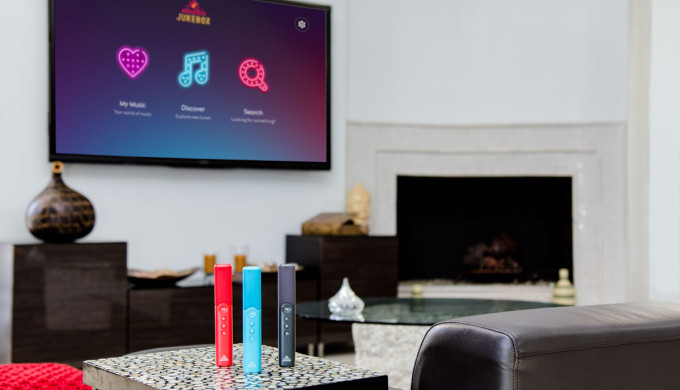 Why is someone making yet another music streaming service? Well, according to an interview with Engadget, CEO Rob Lewis is targeting the millions of music lovers that haven’t yet signed up for Spotify, Rdio, Google Play Music, Apple Music, or other existing online music services, presumably because they’re too complicated or work best when you use them with a mobile device.

The setup is simple: Just plug the dongle into the HDMI port on your TV, Log in, and go. The idea is that this device makes it easier for non-techies to quickly access millions of streaming songs without having to jump through hoops to get started. You don’t have to connect your mobile device or download any programs. And since the dongle only works with Electric Jukebox, the user won’t be overwhelmed with extra content.

The company has not yet announced how deep its music library will go at launch, but  Lewis claims that content from major and independent labels will be available.

The unusual aspect of this device is the fact that it costs $230. While it does include the first year’s subscription to the streaming music service, that only makes up $60 of the total cost, leaving the dongle and remote to come in at $170. That is well above the average cost of a Roku, Chromecast, Apple TV, or Amazon Fire TV — and all of those devices can do a lot more than the Electric Jukebox.

It might be nice to have a dedicated music box that is easy to set up and use, but is it worth spending $230 on?

Theoretically, the Electric Jukebox could pay for itself over time: after your 1-year subscription is up you can either pay $60 per year to continue streaming music without ads, or opt for a free, ad-supported tier. Most existing music streaming services such as Spotify and Google Play Music Unlimited cost twice as much.

If you are interested in the Electric Jukebox, you can pre-order the device for $200 until Oct. 21, which does bring the price down a little.

4 replies on “Electric Jukebox: Music player for folks that think a Chromecast is complicated”