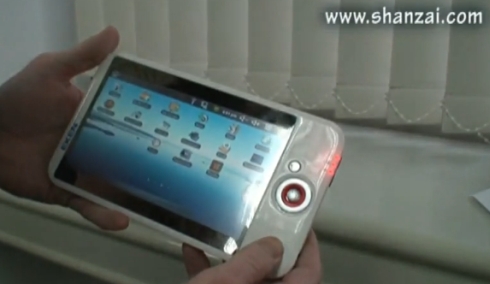 The Eken M001 is a 7 inch touchscreen tablet running Google Android 1.6. An Android tablet that doesn’t ship with access to the 50,000 apps in the Android Market might not seem all that exciting. But it’s hard to argue with the price tag — It runs about $100 in China, and distributors can pick it up for as little as $80 per unit if they order 100 or more tablets.

Eken is a Chinese device maker, and it’s unlikely that you’ll see this tablet sold under the Eken name outside of China. But Haleron has already started marketing the tablet as the Haleron iLet Mini HAL, and plans to sell it internationally for between $179 and $229.

I’ve expressed some doubts about Haleron in the past, since I have yet to hear of anyone successfully ordering a product from the company and nobody has responded to my requests for information. But a source in Taiwan tells me it’s not unusual for companies like Haleron to act as middlemen and market and sell devices manufactured in China without first placing orders with the OEM — only placing the orders when it becomes clear that there’s demand. So it’s possible that Haleron will make good on its offer to deliver this tablet, it just hasn’t stocked up on units yet.

Anyway, the folks at Shanzai.com got a sample unit of the Eken M001 and has posted a video review, which you can check out after the break. The tablet has a 7 inch, 800 x 480 pixel display, a 600MHz ARM-based CPU, 2GB of storage, and an SDHC card slot for expasion. The tablet has 802.11b/g WiFi, and a navigation dial next to the power button.

There’s an accelerometer which allows the screen to auto-rotate between landscape and portrait mode. the touchscreen appears to be capacitive, as the reviewer keeps poking at the screen with a fingertip rather than a stylus or fingernail.

While you don’t have access to the Android Market with the Eken M001, it does ship with a web browser, a handful of games, and an app for watching videos from Chinese online video site tudou.