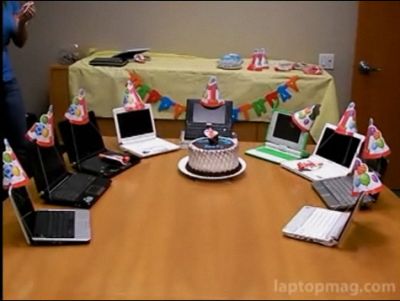 As I mentioned yesterday, it was one year ago today that the first Eee PC was released in Taiwan. So the folks at Laptop Magazine (okay, really it was all Joanna’s idea, but she somehow convinced her coworkers to go along with it), decided to throw a birthday party. Complete with hats and cake. Seriously. You totally have to check out Laptop Mag’s page to see the video and pictures of netbooks in various poses… theres even one image of a netbook slicing the cake.

Now personally, I still think of November 1st as the anniversary of the Eee PC launch. That’s the day the netbook went on sale in the US. I was living in New York at the time and rushed out to grab one from J&R, and posted the unboxing video online as soon as I could. A year later, the video’s been viewed over 125,000 times, making it by far the most popular video I’ve ever posted on YouTube. I think it’s my cat Laney’s cameo that really makes the video shine though, not the netbook itself. The response was overwhelming, and shortly after picking up my first Eee PC, I decided to start eeesite.net.

Netbooks have come a long way in a year. While I was enamored with the Eee PC 701, it didn’t take me long to realize that what I really wanted was a device with a sligthly larger, higher resolution display and a bigger keyboard. In April I bought my second netbook, an HP 2133 Mini-Note and decided to broaden the scope of my blogging a bit by launching Liliputing. Today I’m back to using an Eee PC, but now my netbook of choice is the Eee PC 1000H, which has a larger screen and larger keyboard than the Eee PC 701 that started it all, as well as a faster processor, higher capacity battery, additional RAM, and storage space. I paid $550 for my Eee PC 1000H, but if you shop around, it’s not unusual to see them going for about $450 — or just $50 more than the Eee PC 701 4G sold for a year ago.

We’ve come a long way in a year. And I’m glad someone had the foresight to order a cake. Thanks Joanna!