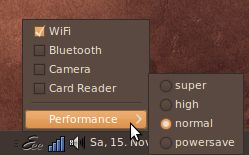 Ubuntu 9.10 may include a number of netbook-friendly features, including the optional Ubuntu Netbook Remix user interface. But one thing it doesn’t allow you to do out of the box is adjust the clock speed of an Intel Atom processor. Fortunately there’s a little third party utility for that. It’s called eee-control, and today the developer released a new version of the application that’s optimized for Ubuntu 9.10 Karmic Koala.

The program has been tested on an Eee PC 901, but there’s a good chance it should work with other Intel Atom powered netbooks running Ubuntu 9.10. Have you tried it on other Asus Eee PC models or other netbooks yet? Share your experiences in the comments.