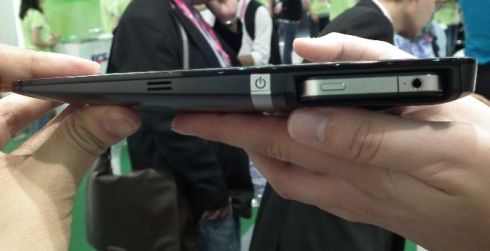 Asus isn’t the only company looking at ways to let you use a smartphone as a tablet. The Asus PadFone consists of an Android smartphone that functions as the brains of a tablet when you slot the phone into a tablet shell. But ECS is showing off a prototype of a tablet shell that could work with a wide range of phones.

The idea is that you would pay $200 for the tablet dock and then slide your iPhone, Android, or Windows Phone device into a slot. Then you could use the 9.7 inch capacitive touchscreen display to interact with your phone’s operating system.

Right now the company is showing off a non-working prototype so it’s not clear how the thing is supposed to make your smartphone software work on a big screen. For instance, an 800 x 480 pixel phone will you be stuck looking at 800 x 480 pixels on the 9.7 inch display as well? And if so, what’s the point in having a larger display? If the ECS device can increase your pixel resolution, how does it handle different aspect ratios? For instance, an iPhone has a 3:2 display, while the tablet shell has an iPad-like 4:3 display. That could lead to some extra black lines around the edges.

The prototype also has an HDMI port, SD card slot and USB ports as well as a camera. It’s not clear if ECS actually expects those to work or if the company is just being optimistic at the moment.

I like the idea of a $200 device that turns a phone you already have into a sort of PadFone… I’d just like to have more details about how the thing is supposed to work.

You can find more photos at IT Pro Portal.