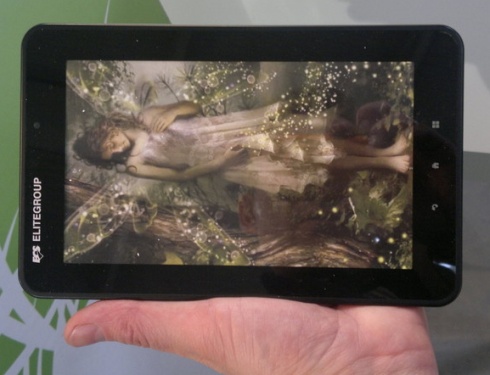 Elitegroup Computer Systems (ECS) is showing off several new tablets at CeBIT in Germany this week. ECS is an original device manufacturer in Taiwan, which means that you probably won’t ever see a product sold under the ECS brand name in the West… but you might see a tablet that looks a lot like the ones on display at CeBIT launched under a different brand name.

The company is showing off 7 and 10 inch models with Intel Atom Oak Trail processors as well as tablets with ARM-based chips from Marvell.

The larger Oak Trail devices have 10.1 inch capacitive touchscreen displays with resolutions of 1366 x 768 or 1024 x 600 pixels. These tablets have Intel Atom Z670 Lincroft chips and are designed to run Windows 7 Home Premium. They support up to 2GB of RAM, solid state disks or 1.8 inch hard drives, WiFi, Bluetooth, and optional 3G. The 10 inch tablets weigh about 1.8 pounds.

The Oak Trail tablets with 7 inch displays feature 1024 x 600 pixel screens, but the rest of the specs look pretty similar. The tablets have multitouch dislays, Atom Z670 chips, WiFi, Bluetooth and 3G options. Interestingly the placard for this model suggests the tablet could run Google Android or MeeGo Linux as well as Windows 7 Home Premium. That’s true of the larger model too, but ECS doesn’t highlight the versatility of the x86 chip on that model for some reason.

ECS is also showing off a 10.1 inch tablet with a Marvell 88AP510 system-n-a-chip. Aside from the different chip, this model is designed to run Google Android 2.2. The rest of the specs are nearly identical to the other tablets, including a choice of a 1366 x 768 pixel display, SSD or hard drive, WiFi, Bluetooth and optional 3G.

All of the tablets have G-sensors, ambient light sensors, and battery life of 5-6 hours.