Taiwanese PC maker ECS is previewing some of its upcoming small form-factor desktop computers in Japan this week, where the folks at ASCII.jp got an early look.

Possibly the most interesting new devices are the upcoming ECS Liva X3 Plus and Liva Z3E Plus, not because they look all that different from the company’s Z2 line of mini-computers… but because they’ll be powered by Intel Comet Lake chips. 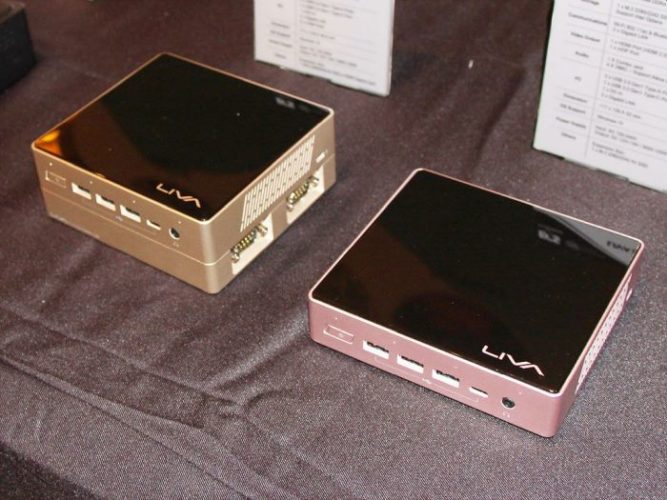 This isn’t the first time ECS has shown off these particular computers, but it is the first time we’ve seen an ECS roadmap since Intel officially introduced its Comet Lake processor family.

That family might not be complete just yet though.

So far, all the 10th-gen Intel Core “Comet Lake” processors we know about are aimed at notebook and 2-in-1 tablet computers. They’re 14nm chips with between two and six processors cores.

The chips include Y-series chips with TDP ratings as low as 4.5 watts or as high as 9 watts, and 15 watt U-series processors (which can also run at up to 25 watts in systems with adequate cooling).

Given that the ECS Liva line of mini-computers have a tendency to use laptop chips, I’m guessing the Liva Z3 series will sport Comet Lake-U processors.

But the folks at Tom’s Hardware hint that it’s also possible they could be powered by one of Intel’s upcoming Comet Lake-S desktop processors. While Intel hasn’t officially introduced Comet Lake-S yet, website xfastest has obtained what looks like a set of product information slides from Intel that lay out what to expect from the upcoming processors.

If this leaked info is accurate, it looks like Intel will offer desktop chips with up to 10 CPU cores and TDP ratings ranging from 35 watts at the low end to 125 watts at the high end.

While the chips are based on a similar 14nm architecture to Intel’s current-gen Coffee Lake Refresh processors, they do require a new LGA 1200 socket, which means they won’t work with motherboards designed for Skylake, Kaby Lake, or Coffee Lake chips (all of which use an LGA 1151 socket).

Whether the ECS Liva Z3 line of mini desktops feature Comet Lakes-S chips or not, it looks like they could be making their way to larger, higher-performance desktops in the not-too-distant future.