The ECS LIVA is a tiny, fanless desktop PC with an Intel Celeron Bay Trail CPU, 2GB of RAM, and a case that’s small enough to hold in one hand.

ECS sells the LIVA as a kit which you put together yourself, but since the memory, storage, and CPU are attached the motherboard all you really put together is the case. There’s no easy way to upgrade most of the components. So if the 32GB original doesn’t have enough storage for you… then you might be interested in a new model launching in August.

The updated ECS LIVA features 64GB of solid state storage. It should be available in August. 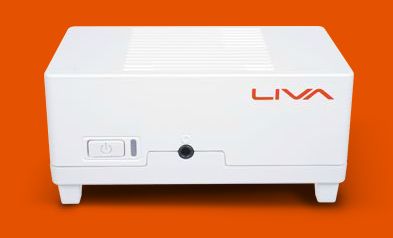 Most other specs remain unchanged. The ECS LIVA has 802.11n WiFi, Bluetooth 4.0, a Gigabit Ethernet jack, HDMI and VGA ports, one USB 2.0 port and a USB 3.0 port. There’s a micro USB port too — but that’s the port you plug the power adapter (or a portable battery pack) into.

The system is powered by a 4.3 watt Intel Celeron N2807 dual-core processor.

via FanlessTech and TechPowerUp