Taiwanese PC maker ECS plans to show off a bunch of new products at Mobile World Congress later this month including the company’s latest mini PCs (many of which we already saw at CES), and some new devices including portable smart speakers and a new line of tablets.

The smart speaker systems include the ECS Bora portable Bluetooth speaker with Amaxon Alexa support (which apparently requires a smartphone app), and a ECS Sirocco battery-powered voice access point that lets you talk to Cortana or other voice assistants from anywhere in your home.

As for new tablets, there’s the ECS Whirlwind, which is really more of a portable 10 inch smart display with Amazon Alexa support, 2.1 channel audio and a battery that lets you move it around the house. And then there’s the TH10GM2 2-in-1 Windows tablet with an Intel Gemini Lake processor. 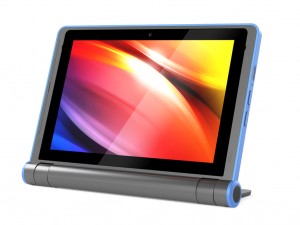 ECS says the tablet features a 10 inch, an Intel Celeron N4000 dual-core processor, 4GB of RAM, and 32GB of eMMC storage plus a microSD card reader for removable storage.

While that’s about all the information in the ECS press release, a page on Intel’s website indicates that the tablet may also be available with support for up to 8GB of storage, up to an Intel Pentium N5000 processor, and with an optional stylus.

Intel’s website also says the tablet has a 1280 x 800 pixel display though, which contradicts the claim of a “full HD” screen in the press release.

Anyway, while the tablet seems like a potentially interesting device, it’s not really aimed at consumers. ECS is positioning it as a device for use in commercial, business or industrial environments including retail, warehouse, or hospitality and ECS says it’s IP54 certified, which means you should be able to splash it with water, and that the tablet can survive a fall from about 76 centimeters (2.5 feet).

One reply on “ECS introduces 2-in-1 tablets, smart displays, and more”