ECS has unveiled a new PC motherboard designed for small form-factor computers. Measuring 6.7″ x 3.3″, the new ECS GLKD-HTI is half the size of a mini-ITX board. It’s listed on the ECS website under the SoC (system-on-a-chip) category, likely because the board is designed to work with an Intel Gemini Lake processor that is not user removable.

But the system has a SODIMM slot for DDR4-2133 memory, an M.2 2280 connector for a SATA SSD, and a connector that supports SATA III hard drives or SSDs. 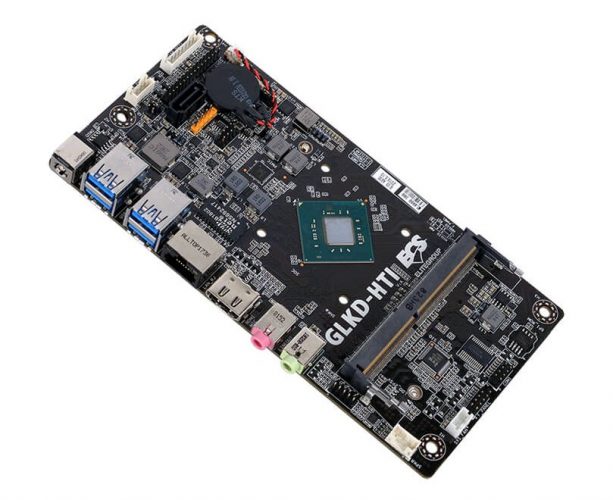 The GLKD-HTI has plenty of ports, which could make it a versatile option for small computers. But it’s not exactly a powerhouse.

It only supports Intel Gemini Lake processors, which are inexpensive, low-power Celeron and Pentium chips with Intel HD 600 graphics. The system only supports up to 8GB of RAM and video output is limited to resolutions up to 1920 x 1200 pixels via an HDMI 1.4a port.

Other features include a Gigabit Ethernet port, four USB 3.0 ports, two audio jacks (line out and mic in), Realtek ALC662 6-channel audio, and an M.2 2230 slot for a WiFi & Bluetooth card.

The board should support Windows or Linux.