EasyPeasy is an operating system based on Ubuntu and Debian Linux, but optimized for netbooks and other computers with low power processors. The OS has been around for years, although it was originally called Ubuntu Eee before the developer was asked to change the name.

There haven’t been many updates lately, but a few months ago developer Jon Ramvi released EasyPeasy 2.0 Alpha, the first version based on Ubuntu 12.04. 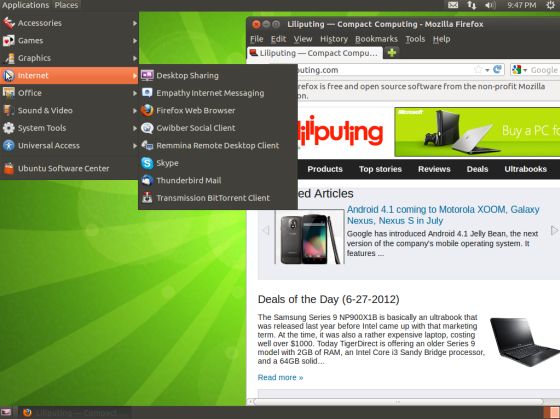 The operating system uses Ubuntu as its base, but instead of the Unity desktop environment, it uses Gnome Shell. And Ramvi includes a few different default applications including LibreOffice and Skype.

EasyPeasy also comes with Adobe Flash and some other proprietary software preloaded.

The OS also includes the Ubuntu Software Center, making it easy to install or remove applications.

EasyPeasy has a history of running well on devices with slow processors and small amounts of memory and storage.

The earliest versions were designed to run on netbooks including the Asus Eee PC 701 with just 4GB of storage space. But EasyPeasy 2.0 is still in alpha, and Ramvi says it’s not exactly stable yet. Some users have reported that version 2.0 doesn’t play well with devices with less than 4GB of disk space.

There’s no word on when EasyPeasy 2.0 will be stable enough to remove the alpha label, but I wouldn’t hold my breath waiting… Version 2.0 was originally scheduled to launch in 2009, but the first pre-release build wasn’t introduced until this March.