Qualcomm’s Snapdragon 835 chip is coming soon… probably starting with the Samsung Galaxy S8 smartphone which will officially be unveiled next week.

Ahead of launch, Qualcomm invited some tech journalists including those from AnandTech and Android Police to try out a Snapdragon 835 reference device.

The results? Unsurprisingly, this is the fastest chip from Qualcomm to date, and one of the fastest ARM-based processors around. But it remains to be seen what that will mean in real-world settings. 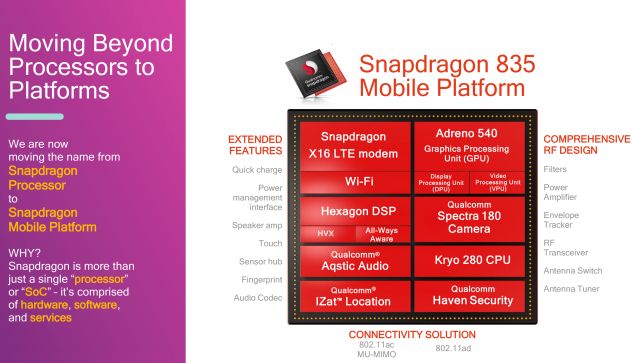 Here’s the deal: the Snapdragon 835 is an octa-core processor with higher top clock speeds than the Snapdragon 821. It also has a new, higher performance graphics processor, called Adreno 540. And it sports a new Snapdragon X16 LTE modem with top download speeds of up to 1 Gbps.

The new processors is also the first commercially available chip built on a 10nm process, which should help improve energy efficiency.

But those results all come from benchmarks such as Geekbench, GFXBench, AnTuTu, PCMark, and 3DMark. They’re not always reflective of real-world performance. And all the tests were run on a reference design rather than a real phone.

The good news is that the reference design is basically a phone-like package, including a 5.5 inch, 2560 x 1440 pixel display, 6GB of RAM, and a 2,850 mAh battery. It’s a bit thicker than a typical phone, but there’s no fan to help dissipate heat, so the reference design is probably pretty close to what you’d expect form a phone in terms of thermal specs.

Interestingly the Snapdragon 835 didn’t come out top on every test. AnandTech ran a lot of benchmarks, and found a few instances where older chips outperformed the new model.

And as usual, it’s hard to compare an Android device to one running iOS, but it seems that the latest iPhones still outperform the Snapdragon 835 prototype in at least some performance tests, although it’s hard to say if that’s purely because of the Apple A10 chip or due to differences between the iOS and Android operating systems.