Looking for a tablet you can use while camping, sailing the seven seas, or working in remote locations? The Earl tablet isn’t necessarily the first rugged device designed for outdoor use, but it’s one of the most interesting options I’ve seen in a while.

The tablet has a flexible E Ink display to make it easy to see in direct sunlight. It has a rugged, water-resistant case. The infrared touchscreen might not be as precise as a capacitive touch panel, but it’s easier to use with gloves on. And the Earl tablet even has a built-in solar panel for charging outdoors.

Update: The team met their fundraising goals… but the launch of the tablet has been pushed back until 2014. 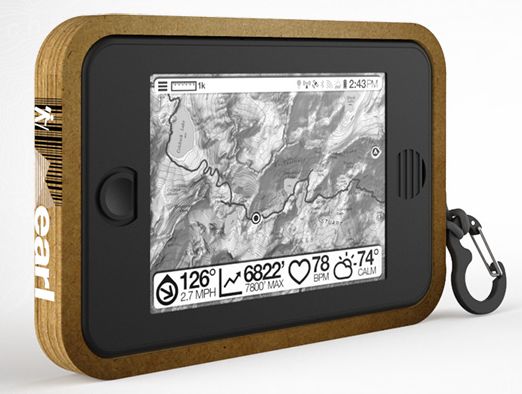 The developers of the project are running a crowd-funding campaign to raise $250,000 to turn the concept into reality. Backers of the campaign who will be able to order the tablet for $249.

Like plenty of other tablets, the Earl runs Google Android and features WiFi and Bluetooth connectivity. But it has a highly customized user interface designed for outdoor use, as well as a few extra goodies including NFC, GPS, and an AM/FM Radio.

You can even use the tablet as a two-way radio and a built-in weather sensor can deliver weather alerts to keep you from freezing to death as you march through the tundra.

The tablet is designed with a 6 inch, 1024 x 768 pixel display and a 3000mAh battery which should power the tablet for up to 20 hours thanks to the low power 1 GHz Freescale i.MX6 DualLight processor and E Ink display.

It’s equipped with 1GB of RAM, 16GB of storage, and a microSD card slot, and the whole package weighs just 11 ounces and measures about 0.6 inches thick.

As far as I’m aware, there’s nothing else like the Earl tablet on market at the moment. But note that the makers of this tablet haven’t actually produced it yet — the website is filled with images showing what the tablet should look like when it’s built.

Also, since the developers are running their own crowd-funding campaign rather than going through Kickstarter or Indiegogo, your credit card will be charged whether or not the team meets its fundraising goal. According to a FAQ, pre-orders will be refunded if the goal isn’t met, but I’d proceed with caution before placing an order.