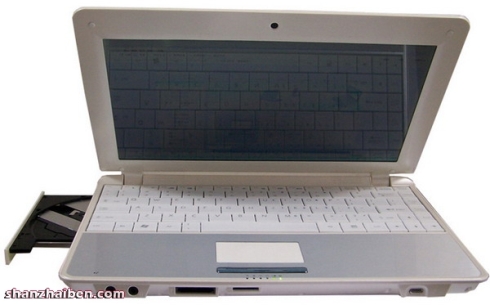 But the E-NC10 has a few things that you don’t find very often on thin and light ultraportables, including a built-in DVD burner.

The computer which is a little too original to really be considered a knockoff, has a 1366 x 768 pixel HD display, an Atom N270 CPU, 2Gb of RAM, and a 320GB hard drive. It has 2 USB ports, 802.11b/g/n WiFi, a 3G SIM card slot, mic and headphone jacks, and and Ethernet port. Considering the fact that the Shenzhen-based manufacturer was able to cram in a disc drive, I’m surprised the only thing that appears to be missing is a third USB port.

2 replies on “E-NC10 from China is a thin, light, and DVD-drive equipped ultraportable”