Budget device maker E Fun plans to launch a 7 inch tablet with a $129.99 price tag in time for the holidays. In other words, even in a world with Amazon, Barnes & Noble and Google tablets selling for under $200, there’s still room for companies to cut a few corners on quality and undercut the big guys on cost.

The E Fun Nextbook Premium 7SE-GP is due out in early December. 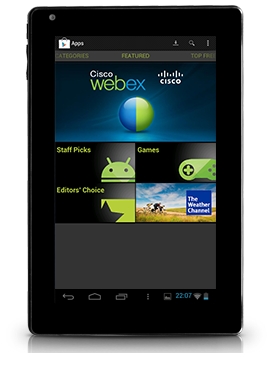 While the storage capacity is pretty underwhelming, the tablet will have a microSD card slot which you can use for music, movies, and other media. The Nextbook 7SE-GP also features HDMI output, so you can hook it up to a TV and use it as a media player.

It’s not just the limited storage space and the processor choice that help keep the price low though. The tablet also has a 7 inch, 800 x 480 pixel display at a time when many other tablet makers are putting out models with higher resolution 1024 x 600 or 1280 x 800 pixel screens.

In other words, don’t go buying this tablet thinking it’ll be just as good as a Nexus 7. It won’t. But it will be cheaper.

On the other hand, you could always just pick up a new, used, or refurbished NOOK Color or NOOK Tablet on eBay for about the same price and turn it into a general purpose Android tablet yourself.

I guess the good news is that E Fun’s new tablet is a lot better than the company’s previous tablet, which had a slower processor and less memory.