It’s official. The third dual-screen smartphone from Yota Devices is a mid-range device that stands out due to one key feature: the fact that it has a color screen on one side and a grayscale E Ink display on the other.

While the original YotaPhone and YotaPhone 2 were positioned as high-end devices (with mediocre specs, but premium price tags), the Yota 3 looks like a relatively affordable device for folks who want a phone that can serve double duty as an eBook reader… although that’s not the only thing the E Ink screen is good for.

The Yota 3 goes up for pre-order at Chinese retailer JD.com on September 5th, and it’ll be available for outright purchase on September 18th. Prices start at $360. 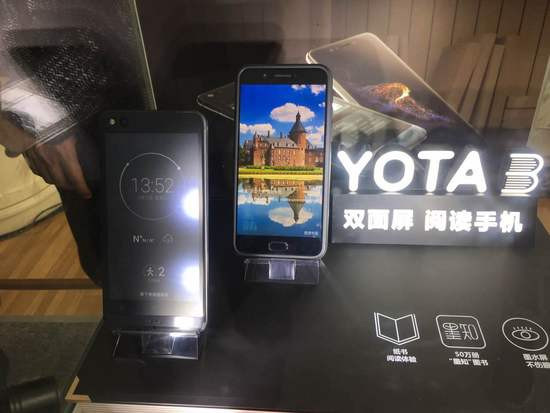 The only catch? The Yota 3 will only be available in China at launch, although it’s also expected to on sale in Russia and other countries by the end of the year. It’s unclear if or when the Yota 3 will hit Europe or the US.

Both versions feature 5.5 inch, 1920 x 1080 pixel AMOLED display on one side and a 5.2 inch E Ink Carta 720p display on the other. The phone has a 12MP rear camera with LED flash and a 13MP front-facing camera, and fingerprint sensor on the front.

Other features include a USB Type-C port, dual SIM support, and a 3,300 mAh battery.

The Yota 3 runs and Android Nougat based operating system called Yota OS, which is designed to let you use the E Ink screen to display widgets or read books using one of several eBook readers that come pre-loaded.