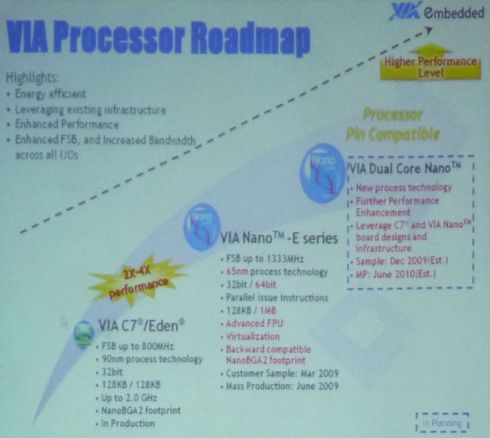 VIA is outlining plans for the future of its low power Nano processor that’s aimed at netbooks and other low power computers. Japanese site PC Watch recently snapped a photo of the product roadmap for the Nano, which shows that the company plans to release a more powerful chip with FSB speeds of up to 1333MHz by mid 2009, with a dual core Nano processor expected to follow by June of 2010.

That seems like a long time away when Intel already has a dual core version of its low power Atom CPU available. But the dual core version of the Atom is currently designed for desktop computers, not laptops. Still, I’d be surprised if we don’t start to see some laptops running dual core Atoms sometime in the next year or so.

But at this point, VIA doesn’t appear to be competing directly with Intel for placement in consumer oriented netbooks in the US and Europe. Rather, the company is targeting developing markets like India and China.