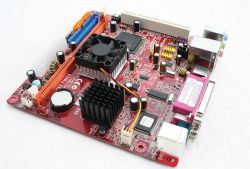 You may have heard that Intel is shipping the first dual core version of its low power Atom CPU. But there’s something you should know: it’s designed for lower power desktops or “nettops,” not low power laptops or “netbooks.” In other words, don’t expect Asus, Acer, Dell, or anyone else to go putting an Intel Atom N330 CPU in a mini-notebook anytime soon.

There are a few reasons for that, but the main one is that Intel is telling OEM’s not to use the chip in netbooks. The N330 CPU users 8W of power, which is more than three times as much as the single core 2.5W Intel Atom N270 chip that’s currently all the rage in netbooks.

That means you’d get less battery life on a netbook using the chip. But more importantly, it’s larger than the N270 and it runs hotter, which means that cooling it would be more difficult.

Does this mean there’ll never be a dual core CPU for netbooks? No. But Intel isn’t planning to release one anytime soon. And neither is any other company that I’m aware of. VIA still hasn’t even released its next generation single-core Nano CPU yet, so I wouldn’t expect to see a dual core chip from that company for another year or two. And AMD has been somewhat wishy washy, if not downright negative toward the whole idea of netbooks.

So Intel’s probably our best bet for a dual core netbook chip. And it could be a while before we see one.

3 replies on “Dual Core Atom may be shipping, but not for netbooks”