Google Chrome OS is an operating system designed around the Chrome web browser. All the apps you run on Chrome OS are web apps, which is why computers designed to run Chrome tend to ship with just 16GB of storage — you don’t need space to store apps or files on a large hard drive.

But just because there’s not a lot of room on a Chromebook or Chromebox doesn’t mean you can’t install a second operating system and run some native desktop-style apps. 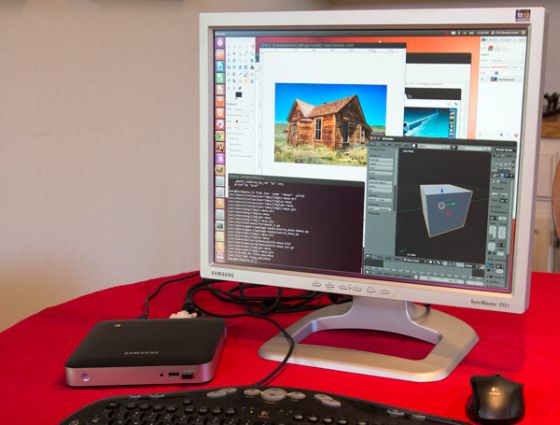 The folks at Extreme Tech took a built of Ubuntu Linux 12.04 for a spin on a Chromebox, and found that the small computer does a pretty good job of handling the desktop operating system.

In order to set up a Chromebook or Chromebox to run Ubuntu, you’ll need to switch the device to developer mode, wipe your data, repartition the storage space, and load a version of Ubuntu optimized for your device.

The good news is once that’s done you can switch between Chrome OS and Ubuntu, or repartition your disk again and switch back to a full-time Chrome OS system if you like.

And since Chrome OS stores almost all of your files and settings in the cloud, even wiping your data when you switch to developer mode isn’t that big a deal. Just sign in with your Google username after your done, and your preferences should re-appear in no time flat.

The biggest limitation to this setup is probably the small solid state disk that you get with Chrome OS hardware. You’ll only be using a portion of that 16GB for Ubuntu, so you won’t be able to install a ton of apps or download a lot of media to your device — although you can always plug in a USB storage device for extra space.