It’s been a few years since a group of developers started working on an open source handheld gaming device called the OpenPandora. A lot’s changed since the original designs were drawn up, and now one of the developers has announced plans for a new device which should offer the kind of performance you’d get from a high-end phone or tablet in 2014. It just happens to be built on a much more open design.

The DragonBox Pyra is expected to be a 5 inch handheld game console with 2GB of RAM, a full HD display, and a speedy processor. 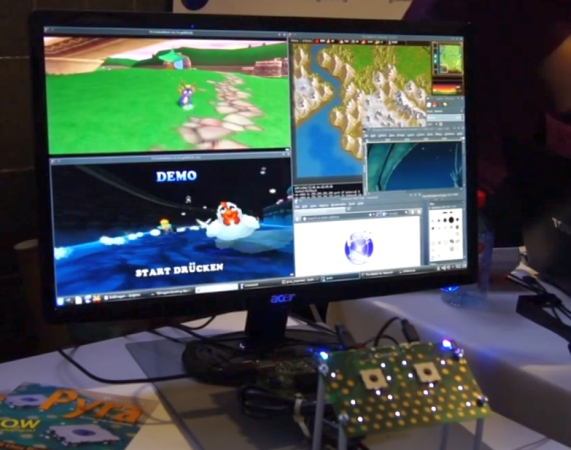 The system will feature a TI OMAP 5 dual-core processor with PowerVR SGX544 graphics. While that means the 3D graphics driver will require a proprietary binary blob, developer Michael Mrozek says the kernel is open source — which means that even if Texas Instruments stops updating the graphics driver, independent developers will be able to continue using the existing driver when compiling new kernels or operating systems.

Update: While initial work on the project involve an OMAP5 processor, the team is also now looking into Qualcomm Snapdragon, Allwinner A80, and Intel Bay Trail processor options.

If you’re wondering about the resistive touchscreen (because resistive has sort of become a dirty word in recent years), it’s because you can use resistive touch panels with either a finger or a stylus. Using a stylus gives you greater accuracy, which could come in handy when playing point-and-click style games.

While the Pyra is still a work in progress, Mrozek showed of a sample of the board at FOSDEM recently, where he demonstrated its power by running two PlayStation 1 emulators at the same time, as well as a Battle of Wesnoth game and the GIMP image editor.

In other words, the system has enough power to run a modern Linux distro, allow you to emulate a classic video game console, run newer games, or run popular Linux apps.

There’s no word on the price or release date yet, but don’t expect the DragonBox Pyra to be particularly cheap. This is a niche device aimed at open source gaming enthusiasts and it’ll be produced in relatively small quantities, which tends to drive up the cost of consumer electronics. But there’s really nothing else quite like it on the market at this point, which could make the project worth any (fairly reasonable) asking price when it launches.